My Money And My Life

Clear one hurdle and a new adventure embarks. From what I can tell, I’ve managed to keep my house, get an impressively modified mortgage, and built my business to the point that I can pay at least all my regular bills by working seven days a week. That is an immense improvement compared to last year. I look forward to the next improvement that will allow some ease. Frugality and investing helped me reach financial independence for a while, more than a decade ago. Now, to reclaim it, I plan to step back through that process again. I am confident I can regain financial independence the way I did the first time, but along the way I followed some other steps that systematized the process. A bit of structure is handy, and I will use it. I followed eight of the nine steps of Joe Dominguez’ Nine Step Program, Transforming Your Relationship With Money that was popularized through the book Vicki Robin wrote, Your Money or Your Life (aka YMOYL). Over the next several months I plan to step through those steps again. You are welcome to come along.

For those of you who aren’t aware of Joe Dominguez’s or Vicki Robin’s work, don’t be surprised. Yes, the Nine Step Program is impressive. Yes, Your Money or Your Life is a bestseller. And yet, most people do not want to study, research, or deal with personal finance. In America, despite our fascination with wealth, we have layers of taboos about money. Avoid understanding personal finance, and avoid the taboos. Ignorance is a socially acceptable position. To fully understand the Nine Step Program you have to read through and do the Nine Step Program. It is inherently simple, but that doesn’t mean it is easy. Allow me to poorly paraphrase within this paragraph: money is a thing and doesn’t carry any emotion so don’t give it any, we exchange our time for money so keep in mind that money is slices of a life and therefore precious, respect your value, live according to your values, spend less than you make, invest the rest. Either in the books or directly in the Guides, you can find the rest of the details.

An understanding of personal finance escapes most people. Even without the taboos, messages from financial institutions reinforce the notion that personal finance can best be handled by professionals. In some cases that is true. In many cases it is not. There is no magic formula for managing money, whether managed by professionals or individuals. Decreasing expenses and increasing income to the point that you have enough is not a formula, but it is a way of life. The odd thing is that, as a way of life, it is so uncommon. In some cases, hiring someone else to manage a person’s money is necessary because of lifestyle choices, learning difficulties, a lack of confidence, or a desire for optimization. In many cases, getting enough relies more on understanding personal values than it does on accumulating massive wealth. The person who is happy with living aboard a small sailboat needs less than someone who needs a 4,000 square foot formal mansion on a golf course in Hawaii.

Joe Dominguez was a revolutionary who used conventional investing to live a life based on his frugal values. For more of the story, go to New Road Map’s web site. From what I understand, Joe saw a way out of his job, retired very young, developed and taught the Nine Step Program as a series of workshops and seminars and tapes, which with Vicki Robin’s help became the first edition of Your Money or Your Life, which led to the second edition of Your Money or Your Life. Disclosure: the workshops and such funded a foundation called the New Road Map Foundation

where I’ve been board Secretary and am now the Information Manager, and while talking to Vicki Robin about the second edition I was encouraged to write my own story and perspective in another book called, Dream. Invest. Live.

which came out as the economy crashed and most of my investments subsequently imploded.

Back in 1998 I recognized that through frugal living and prudent investing early retirement was an option. A year or two later a friend suggested that I read YMOYL. It confirmed my assertion, and it also systematized how to quantify the situation. Within months of finishing the book and the program, I was able to reasonably confidently retire from my aerospace engineering career. Then the market boomed and busted. And for health reasons I asked for a divorce. And what had been enough for two to retire was less than enough for one. A bit of patience and optimism almost regained my financial independence, but then the Triple Whammy happened. Several months later my portfolio hadn’t recovered and my job applications were unanswered. Through a lot of hard work and timely advice I was able to build my business and save my house. Now that I know what I owe I have the data I need to step back into the Program.

Throughout all of this, while I may be discussing the Nine Step Program and personal finance, it is easy to overlook the importance of frugality and personal values. I know I couldn’t be in such a positive position without understanding my needs and values. Without those two items, the rest is moot.

The perfect blogger’s approach would be to establish a schedule, demonstrate regular and periodic progress; but the realist knows that it is more important to chronicle such a journey within the constraints of maintaining a job, a home, a place in community, and a social life. I don’t know how long this will take.

I’m not starting from a clean slate. I’ve already read the book. I read and suggested changes to the early versions of the second edition, and ended up in it as a case study. I worked through the entire program, with an unfortunately inauspicious difference of opinion about Step 9 – Investing. I’ve worked through my thoughts enough to write my book, which I continue to have confidence in, though maybe less in the investment environment. I’ve waited to restart until I arrayed some of the data points that I know will be key: my total debt, online banking accounts, and a level of income security that is shaky and about as certain as most people’s.

This time through I plan to use the Nine Step Program that is online, partly because I understand the narrative within the books and simply want to use the structure to support my effort.

Through serendipity I’ve somehow managed to be given my own copies of the tapes, the CDs, both copies of Your Money or Your Life, and of course my copy of Dream. Invest. Live. There’s a progression that I suspect will continue. The double digit interest rates of Joe’s era are temporarily gone. Prices change. The relative expense of food versus fuel versus housing shift. Income has a different character in 2014 than in 1994. The world is further along in the changes we haven’t forestalled. 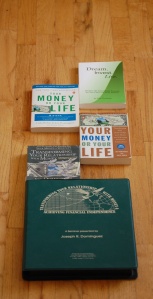 The photo shows one product leading to another, and I purposely left room for more; possibly even a second edition of my book that reflects what was revealed during the recent economic turmoil.

If you think personal finance is dull, I’m not surprised. If you think financial independence is unattainable, you have lots of company. If you want to watch as someone works to attain it – again – stay tuned. If you are willing to embark on your own journey, I applaud you.