Sunday night, my weekend begins. Oops. No, this isn’t a whine, a rant, or a lament. It simply is. It is not, however, news to most entrepreneurs or small business owners. Balancing work and play, money and time, means challenging conventional notions of workdays versus weekends. Old ways of working and living are changing. New definitions are necessary, and much more useful.

So far in 2014 I’ve taken two, maybe three days off. One of those was a sick day. That’s as much time off as most people get in a week. I look forward to my business doing so well that I can take that much time away from it. We’re not there – yet.

The US government tracks the unemployed (as we hear about so frequently), the employed (which is easy to assume is everyone else), and the “not in the labor force” (which is not talked about much.) As of the May 2014 report, there are about 730,000 discouraged workers, people who aren’t counted as unemployed because they couldn’t find employment. That’s the type of definition that I hope wouldn’t make it into the Oxford English Dictionary. They aren’t counted as unemployed because they’ve been unemployed for too long. If they are not being counted does that mean, as far as the US government is concerned, that they don’t count? Does a population larger than Seattle not count?

From what I can gather, at least some time in the last few years the US government considered me discouraged and not in the labor force even while I’ve been applying for jobs and working seven days a week. Maybe I should be more discouraged; but, I’m not.

I’d be more discouraged if I expected to live the same old life by working the same old job that is part of the fading American Dream.

I know a brave man. To slightly alter Horace Greeley, my friend said to himself, “Go East young man”, and he did – with some prompted and encouragement from his friends. “East” wasn’t as important as “urban”. He took a trip away from this rural rock (or pile of gravel) that is Whidbey Island to see what life, and work, might be like in New York City, though any city may have sufficed. He came back, which surprised me; but he came back with different ideas of work and his worth. See what a bit of bravery gets you?

Thirty years ago if a person wanted a change they retyped their resume (with a fresh typewriter ribbon on very nice paper) and started using real knuckles to knock on real doors. The resume era is behind us, mostly. Now it is LinkedIn profiles with purpose-produced videos, and considerable electronic and social networking. He and I passed each other in the grocery store (not even a supermarket) and quickly passed a few business-related possibilities. He smiles a lot anyway. He’s smiling more now. He has an idea that doesn’t fit into conventional models, but it gives him more options in his life – including building up one job while he keeps and possibly improves another.

It is necessary to keep life and play within a day. Work should not take over every moment. I knew he wouldn’t be trapped in just thinking about work. Impressive that he balanced both.

The conventional American Dream rigidly drew limits and boundaries: 5 eight hour days per week, Saturday and Sunday off (to cover two of the common Sabbaths), and a few sick and vacation days sprinkled around. Don’t forget your lunch hour even if it is only forty minutes long. Everyone works the same way, so no explanations required and scheduling parties is much easier.

A new variation is coalescing that differs for everyone, which means it confuses many others. Work as much as you have to, when you need to, but not necessarily all at once. A work day may stretch from some other time zone’s morning into your own evening, but as ease allows there is also time to visit with a friend, tend a garden, watch a sunset, 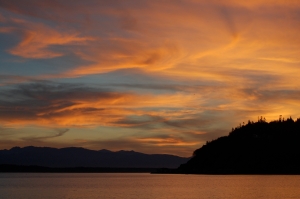 a short walk from my house

and maybe even dance for a song or two.

The transition from the old to the new isn’t instantaneous. Personal values must be pulled out from societal conventions and habits. What matters to the person becomes more important than a possibly anachronistic routine. I continue to make the transition. During my two years of applying for jobs I envisioned getting a job and conforming to their schedule. I’d do that today, for the right situation. But in the meantime I am changing. Change was driven by necessity and because: 1) I was possibly labeled a “discouraged worker” because I possibly fit into “Employers think they are too young or too old, or they face some other type of discrimination.“, 2) my simultaneous efforts to build a business were beginning to produce results, and 3) even when I had a conventional job I was willing to challenge convention.

My quiet Sunday evening is quiet, and I still have about two more hours of work to do as the sun sets. Of course, I’d like to have every evening off; and while we’re dreaming, how about every morning, afternoon, and night off too. While I am typing this post I’ve been sipping a fine beverage that involves ice but no soft drinks, I can hear the birds outside, and I can smell a roast that is in its second hour of slowly cooking.

Roasting while I type. Done by the time you read this.

I actually had to commute today, but I was able to do so in a comfortable work shirt which I’d worn while helping a dear friend restock a wood pile for next winter. Here at the end I am looking forward to comfortable clean clothes, comfort food, and getting comfortable – even with the classic comforts seen in the ads.

I work seven days a week, mostly; as per my Rule of 7. As my net worth increases I’ll take more time off; but like so many other middle-aged people I’m having to quickly recover from a major financial setback while mortality make me simultaneously much more aware of the preciousness of every moment. I work. And I definitely appreciate play, or even the satisfaction of finding some time to help a friend.

With that in mind, don’t be surprised if I don’t wordsmith this post to a high polish. I rarely even pass through a second draft. Life is too precious to spend too much time trying to conform to old habits, others’ expectations, or society’s conventions. Living my life the way I want to live it is the most encouraging way to live I can imagine. As the unemployed become the discouraged, then become entrepreneurs and sole-proprietors by necessity, we may also become one of the most encouraging examples of a new American Dream, of living a new definition of a life.