Smartphones are it! So are tablets. So were laptops. So smartwatches and eyewear and wearable computers shall be. So we can be proud we’re working the trends. You ain’t seen nothing yet, and when the next thing shows up it may look like nothing to everyone else, but the wearer will see a different world. I tried on Google Glass, listened to the pitch, saw a presentation from Disney Research and realized the world is about to change again – and not only because of Google.

For the first several days in April I attended the Museums and the Web conference, 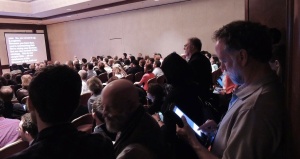 a conference for museum operators and staff that are wise enough to know that marble columns, white walls, artifacts, and little placards aren’t enough in 2014. Visitors expect to walk in with their smartphones in hand, take photos to share regardless of copyright, and are more likely to access wikipedia than a curator or docent. I was there as Project Manager for the Virtual Museum of the History of Computing in Learning and Education (HCLE). Smartphones in our museum? Our museum will be in the smartphone. No red velvet ropes. No dusting required.

Most of the presentations were from museum people talking about museums, visitors, and technology. Just like in education, where the teacher’s role and control changed because of computers (which is one of the primary motivations for our museum), museums’ roles and controls are changing. (I think they have a lot to learn from the educators, but then I have a bias.)

Two presentations that came from the technology side pleased the geek in me.

Eric Brockmeyer from Disney Research (Pittsburgh) gave a sweeping show about using technology that brings the animated characters out of the movies and into the real world. Rapid prototyped versions of the characters are equipped with robotic parts, LED light-piped eyes that track the motion of the visitor; even ways to save and store and listen to sounds generated by, in, and around plants. A quick segment, maybe not even a minute long, showed two pico-projectors working in concert to as part of a game. Investors in MicroVision, like me, know the potential for pico-projectors; and we’ve frequently cautioned our prognostications because we realize the company’s success may come from applications we haven’t imagined. These two pico-projectors played a new trick (at least to me). One used visible light. One used infra-red. The visitor only sees one, and may not know how the other one adds depth and intelligence to the interaction. Robots aren’t just for building cars. LEDs aren’t just for lighting the living room. Plants may finally get a voice in a language we can hear. 3-D animations may walk across a table and play with your drink. (A sobriety and sanity test I just invented.)

Google brought Google Glass, their revolutionary eyewear that is so well-tested that I’ve seen about a dozen in demos and in real life.

The presenters made a good case for how wearable computers will change the way we interact with the world and each other. Previous wearable computers were bulky, required belted joysticks and keyboards, and large CPUs and battery packs. Miniaturization has shrunk much of the hardware into a pair of glasses and a smartphone. (One presenter mentioned that we all have smartphones. Ha! My mobile is a Kyocera flip phone,

and I only have it because Sprint pulled the antiquated tower hardware that could actually talk with my previous, perfectly capable flip phone.) To me, the main enabler was the control being voice and a finger swipe rather than hand-controllers. Free the hands and increase the interaction, museum or not. Add sensors and the interaction reaches other sensory dimensions.

After the presentations I quickly roamed the exhibit hall. There was a lot to do, so I couldn’t spend much time with the vendors; except for my friends over at STQRY. Maybe it is easier to chat because any business from HCLE is theoretical or years away. They make mobile apps, or apps for mobile devices; which means they are central to the conventional museums’ conversation and conversion. And they had a Google Glass tester, which I happily wore. If they expected a bigger reaction, I may have disappointed them. I’ve seen such devices before. As friends I asked them about the potential I have seen with pico-projectors coupled with hands-free computers.

Pico-projectors don’t just act like another screen. They can project. They can read. One application is a computer that replaces the screen with one pico-projector and the keyboard with another. Computers can take the next step from room-sized to desktop to laptop to handheld to worn to – I don’t know, sewn in? One of the consequences of MicroVision’s technology is that, while it is projecting an image it can also capture finger movements. Hand swipes on an iPad can become hand swipes in mid-air, which may look strange but are less obtrusive than people talking on cell phones. A computer becomes a device the size of a coffee cup, or smaller: CPU, memory, power, and two projectors the size of thin mints.

That doesn’t change the museum experience until someone takes the extra step and makes it wearable. Keyboards in air, that are only visible to the wearer. Displays that are transparent, and that can overlay the world with data or digital graffiti (which is far preferable to real graffiti). If the glasses are indistinguishable from spectacles, then there is no control over what the visitors sees or accesses. A virtual world overlaying the real world means white walls have their place. Or shares, because this can also improve the appeal of museums. A visitor having a revelatory experience can immediately share it to their social network without interfering with the rest of the visitors. Awareness grows. Culture spreads. Museums increase their relevance.

Such a vision may be going too far for some conversations. Yet, the speed of the technology will not be changed to accommodate the speed of a museum’s evolution. The revolution will walk in the door; and it won’t just happen in museums. Classrooms, conference rooms, offices, even around the home will work best if they work with the fact that people will use their finger tips to call up data from anywhere without intruding on someone else’s life. Though, casual observers may find it fun to watch a bunch of people wagging fingers at each other. And of course, the wearers may have a grand time in the virtual world making fun of the computationally naked folks.

As an investor in MicroVision I am encouraged, at least for the technology and hopefully for the company. Their proprietary technology solves many problems simultaneously while adding features: always in focus, even on moving curtains; biometrics, by possibly conducting real-time retinal identification; and evidently the possibility to extend beyond visible light, to do . . . ?

Many of the technological changes are discussed as extrapolations, dreams of possibilities a decade away. Pico-projection has been in work for decades and may disrupt technologies and our world, even institutions like museums, within years – and for all I know, months.

About ten years ago I tried on a wearable computer. MicroVision actually released it as a product. The Nomad was a cigarette-sized box clipped onto the brim of a baseball cap, with a hand controller worn on a belt. The display was only in red, aimed at too niche of a market (auto mechanics), and wasn’t designed for manufacture or repair or profit. Yet from what I recall, Nomad’s image was clearer than Google Glass’. Maybe that’s just my age. I also recall the color prototype that played images directly onto the retina, dramatically decreasing power requirements while also making the display readable in daylight (except for maybe in the desert at high noon.) Nomad’s controller was more responsive because it didn’t rely on wi-fi. But it didn’t look nearly as nice (which is a very sad statement for both) and didn’t have Google’s publicity and name spreading the word.

I am glad to be alive as we live through this era, just like I find it unique to have lived through an era that so dramatically changed education and the rest of my life. Just like before though, people become comfortable with the new speed of change that follows a disruption – and then the next disruption hits. I don’t know if it will be from Disney, or Google, or MicroVision, or someone else, or some combination of them; but, I am more convinced that it is about to happen. I hope I can afford to buy in and enjoy.

1 Response to Googly-eye-ing Disney And Projectors