A Believe It Or Not Party

Thanks to everyone who showed up for the party. The dancing was memorable, as always. It was “A Believe It Or Not Party”, held because waiting for a big reason to celebrate was taking too long. Life shouldn’t be held captive by circumstance.

I enjoy parties, particularly giving them. They’re a great way to visit lots of friends all at once, get in some dancing, and end up with some tasty leftovers. (Thanks so much for the gluten-free pumpkin bread.) And I don’t even have to drive.

Articles describing how to decorate the house, what to cook, even how to invite guests are foreign to me. Over the years my parties have developed around some simple rules.

My house is only 860 square feet, and with the spontaneous help of those who showed up, we’ve had dance parties of thirty people with three different types of music. Living room = swing. Back room = blues. Carport = latin. And yes, last night’s weather was a few degrees above freezing, with wind, and rain – and salsa outside in November sounds silly until you realize that you’re warm by the second song.

Sometimes the dancing doesn’t happen because the conversations are so engaging.

I have fascinating friends. I invite a lot of them, but always a somewhat different set; not through any grand plan but because I trust them to fill in with invites to their friends, which leads to a bigger and different circle every time. For those who don’t know me, I am an extreme independent moderate. I am passionate about what people have in common and try not to make assumptions about affiliations and associations. One conversation was about opposing the legalization of marijuana (though marijuana is legal in Washington), while at the other end of the room people were comparing prices and describing the anti-anxiety benefits of partaking of the herb. More than two sides of the gun conversation were represented, and yes it is not an either or issue. There were liberals, conservatives, and innovatives. There was a great supply of corporate stories, the modern day fountain of clashing archetypes. And the circles shifted such that people from opposite sides of one issue were on the same side of another. No TV show is ever better than that. (Though I must admit that Aaron Sorkin gets close.)

Sometimes all of the conversation evaporates within minutes when a critical mass of dancing kicks in, people move the furniture, and we crank the volume. Having light furniture and being surrounded by vacant lots and empty vacation houses has its advantages.

If I’d described it as a frugal party it wouldn’t have been as appealing, yet frugal it was. The most valuable and precious elements are always the people. It cost less than some people spent on dinner out. The biggest cost was probably time, and the house needed cleaning anyway.

Everyone there had a reason not to be there, but they showed up anyway. It is too easy to step back from socializing when in the midst of turmoil and drama, or even just wind and rain. I stepped away from having parties for the last year or so, and after seeing the bill (which someone else surprised me by graciously picking up most of) I realized that I could’ve held a party or two during the hiatus.

We all have reason to worry, to step away while we sort through our troubles, or just to re-energize. Faking a smile may work for some, but an honest expression is worth more and is healthier. But stepping away too long is too wrong.
“Shared pain is lessened; shared joy, increased.” – Spider Robinson
We all have reason to worry, but we all have reason to share, and that is equally true of celebrations. I’ve waited for news to celebrate that was either getting an affordable mortgage or selling the house, having my portfolio sufficiently recover, making enough money without spending too much time, or even celebrating a serendipity that I have yet to experience. I’m glad I didn’t wait longer.

The party may be my last in that house. It may be the first in the resurgent series. I can’t know and must continue to live my life day by day, and sometimes hour by hour.

One intrepid fellow, and fellow MVIS shareholder, dropped by, commiserated a bit, weighed the crowd’s reaction to MicroVision’s promise (including the reaction of an ex-MVIS shareholder), mingled as well, and left me with a bottle of scotch from a city I walked through when I crossed Scotland. We may not have much to celebrate regarding MVIS, unless it ends up being buying at a record low, but we left the evening with the idea that celebrations can grow because good news can happen. Imagine the dancing at that party. We’ll probably have to buy a case. 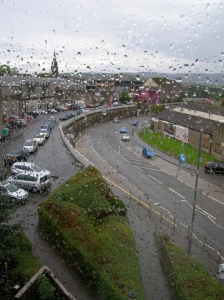 3 Responses to A Believe It Or Not Party