Oops. Mistakes will be made. How many mistakes can a person make in a life? It is undoubtedly greater than zero. Wednesday’s blog had a few. Some would say my recent financial turmoil is evidence that I’ve made my share. We try to avoid making too many mistakes, but trying to make none is the best way to make sure nothing gets done. Being careless about mistakes is one way to create the biggest mistakes. Whether it is personal finance, a project, or life the best way to make progress is to know that mistakes will be made, and that hopefully we’ll find ways to manage the consequences. The way we manage mistakes and misfortune probably does more to define our lives than our successes and completed plans.

My apologies to the mortgage industry. I forgot that the mortgage modification process changed several weeks ago. The massive piles of documentation that I described in Wednesday’s post have been reduced by something called Streamlining. It still looks like a lot of forms to me, but evidently it isn’t the deluge of paper and toner and postage that was required back in May. The fact that the package was delivered on the 26th, opened on the 27th, and was due on the 28th hasn’t changed. And the fact that I don’t have the money, yet, hasn’t changed. But at least the process is simpler. I made the mistake of avoiding the mistake of kicking off an anxiety attack. Opening the mortgage mail has not been a positive experience, and their mail and phone calls have induced emotional hangovers that last hours or days. My apologies for missing the potential good news that I can’t act upon, yet.

By the way, as I understand it, the streamlined process effectively is a low- or no- documentation mortgage; which, ironically, are the same types of mortgages that exacerbated the debt crisis a few years ago. It was even suggested that I could simply claim to have enough money, get my mortgage payments reduced about 30%, possibly forestall the foreclosure process indefinitely, and then hope the money showed up in time. Uh, no. I can’t do that. That would be a mistake, especially if the money didn’t arrive.

Most people want security. It’s how we end up with Patriot Acts, the TSA, and cameras watching every public place. Social Security sounded like a great idea, providing security during that second time of life when we’re less likely to be able to provide it for ourselves. Maybe that will still work out. In the meantime, every one is encouraged to provide for their own personal security through good careers, financial planning, and establishing a stable home life – the home as castle as security.

Jobs, investing, housing, etc. are all embarked upon based on guesses. I guessed that Boeing would design and build a second generation space shuttle or an advanced type of transport in the 80s or 90s, so I steered my career that way. Oops. Even though I got to work on Reusable Launch Vehicles and High Speed Commercial Transports, Boeing’s decision to stick to basics stuck my career plan into a box. I guessed that small cap stocks like MVIS would disconnect themselves from the market swings and command a premium as they launched disruptive technologies. That may prove true, but my current condition suggests it was a mistake. The stocks went down with the rest, didn’t come back up, and are experiencing the antithesis of a premium as they trade at about 20% of what I consider a rational conservative valuation.

I bought my house on the guess that after a 15% drop in the asking price, and with 20% down, and with great potential in my remaining stocks, I could feel secure in my small house. Mistake.

I am very fortunate. Most of my mistakes are financial, possibly temporary, and may even not be mistakes after I practice a bit more patience. My career choice gave me a great diversity of experiences: technically, managerially, and culturally. My investments have been dramatic, and have provided me with phenomenal experiences and continue to contain great potential (which I hope is unleashed real soon.) My housing mistake hasn’t been a mistake, except financially, and that’s only if foreclosure happens before my financial recovery. This house has been my favorite home.

The aspect of my business that I enjoy the most is working with people who have ideas that they want to implement. What kind of plan can we put together that gets them where they want to go, and what other possibilities exist in case something doesn’t go the way we guessed it would?

Writers can polish a book for so long that they never publish. Financial plans can be adhered to so religiously that careers are clung to while life slips by. (That’s why my book, Dream. Invest. Live. isn’t just Invest. or Work.)

Meticulous details can be impressive and self-satisfying, but concentrating on them can distract from noticing the goal got closer on its own.

Books have errs, airors, er, typos. Portfolios will contain great ideas that were actually bad investments, which is why diversity is a good thing. Plans should be written in pencil instead of pen.

I don’t strive to make mistakes. I made that mistake once. Right after graduation I declared that I was going to make all of my mistakes before I was 25. That way I’d get them out of the way. Don’t young people have the cutest ideas? Looking back after another 25 years I could make the case that I didn’t make enough mistakes, even though I tried. Really, applying to Microsoft before 1985 and giving up my aerospace career could have been a really good idea. But, I didn’t want to risk making that particular mistake at the time.

My biggest mistakes haven’t been how I guarded my self against loss. My biggest mistakes have been not putting more energy into marvelous possibilities. I’ve lost tens of thousands of dollars on MVIS, if I sell. That is insignificant against the millions I could have gained if I had bought as much AOL (aka AMER) as I wanted. The same is true of SBUX, FFIV, and several other stocks that impressed me but that ran into my cautions.

Dancing, at least the way I do it, is a celebration of mistakes made into fun. As long as no one gets hurt, a missed step or an extra turn may create something to remember and repeat. Waltzes don’t have to be perfect to be perfect. What started out as one kind of dance, may become something new and better.

As any of us older than 25 know, some of our biggest mistakes may be what we say rather than what we do or mean. I have frequently confirmed that, at least verbally, my size 14 feet can fit in my mouth. 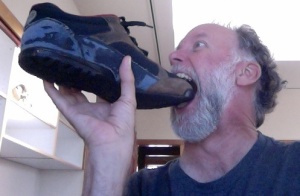 Foot-in-mouth disease happens, and as we mature we learn to acknowledge and forgive those mistakes. The same leniency in the rest of our lives will release a lot of our stress. Be human. Make mistakes. That’s perfect.

2 Responses to Be Human Make Mistakes