Crackle, crack, snap, pop, whistle, pop, pop, pop, snap. Not a Rice Krispies commercial. It is 11:15pm on the third of July, the night of the main celebrations on South Whidbey. Celebrate here on the third, and you can also go to Seattle for the bigger displays on the fourth. We do things a bit out of step with everyone else, and it is our differences that give us character. I was about to comment on silence, but another barrage just began. Exuberance happens, whether it is legal or not. I lead a unique life. It too is out of step with many aspects of those around me, but it is that difference that helps define me. I guess our nation was built from a similar idea.

My normal time to post would’ve been this morning, like every Wednesday. But, there was a meeting, and then there were chores, and then there was a long interview for a PhD candidate doing a dissertation on what it’s like to be unemployed and how that is reflected across social classes. An interesting day. Then a rare event, two dinner invitations within the neighborhood, both using my neighborhood’s fireworks display as a dessert. It’s part of our dues, and a part that I appreciate more than the pool or the tennis courts. A full day, and just the time to unwind, but pop, crackle, boom, I suspect I won’t be sleeping for a couple more hours.

My normal topic is some variation on personal finance, which has been highly personal lately. I’ve become my own case study. There’s been news about the foreclosure and my business and my portfolio, but the foreclosure news is so convoluted that I probably can’t type it up with these pop, snap, whistle distractions. My business news is enough to encourage me, but nothing definite enough to pass along, and my portfolio news hasn’t changed since I posted it on Sunday (except for the understandably incredulous reactions to anything I write about MicroVision.)

So, as I sit here, listening to the chuff of an illegal firework launching into the neighborhood sky, probably to settle in a yard that doesn’t belong to the launcher, I swing back through history. What was it like to write while watching “the rockets’ red glare?” What was it like for my ancestor, Francis Hopkinson, who signed the Declaration of Independence?

The United States was founded from a collection of colonies that were thousands of miles away from the seat of government. The travel time and danger of crossing the Atlantic meant the colonists would be out of step with England. In some ways that held them back. In other ways it freed them to try new systems of governance, and it required them to become more resourceful. It had to be a scary notion hanging on to the edge of a continent which had no reliable map or measure of its extent. Anything could be in the great empty spaces on the parchment. And yet, they felt the need to take on the risk of countering the wishes of the mightiest empire while hoping nothing unexpected snuck up from the wilderness. It wasn’t a want. It was a need. The likelihood of being hanged for treason was greater than the likelihood of achieving independence. The need was great enough to encourage them to commit to a new way to live.

They succeeded, and promptly embarked us on a history of the states never quite being in step with each other. And yet, somehow surviving.

It was Britian’s backlash in the War of 1812 that launched the rocket’s red glare. Again, this country that was slightly out of step with the rest of the world, and was almost tripped by its earlier overlord. The rockets failed. The British had already burned Washington D. C.,  but somehow the United States succeeded. It would be romantic to imagine Francis Scott Key, writing the lyrics to the national anthem while real fire works burst in the air, but he waited until the smoke cleared, the Sun came up, and the larger US Flag (possibly designed by my ancestor) was raised over the last line of defense.

Entire minutes have gone by without another firework, and it isn’t even midnight. My neighbors grow more considerate. Vets with PTSD can begin to relax. Pets will eventually come out from under the furniture, unless they ran away in fright. (Evidently, the Fourth of July, and probably the Third of July, are the busiest times for dogs to jump fences and run.) I’ll finish this post and try to get some sleep.

Many people are living lives that are out of step with the mainstream. Some are by choice. Many are by chance. Personal finances and everyday realities are requiring the re-evaluation of priorities and values, replacing conventional wisdom with resourcefulness and re-designed systems. The over-arcing system (boom, pop – okay the fireworks aren’t done yet) the over-arcing system expects compliance and is confused with lives that don’t fit old models. In the past, that would have unfortunate consequences. But now, in a government “of the people, by the people, and for the people”, at least according to Abraham Lincoln, change should be possible.

It is past midnight now. It is the Fourth of July. I guess that puts us back in step with the other celebrations – but people seem to be obeying the unofficial midnight curtain call. Maybe the island’s not that far out of step. We only celebrate on the third so we can join everyone else on the fourth. Maybe by being a little out of step we can try a different rhythm, while being close enough to the mainstream that they don’t lose sight of us, and also while not being so far afield that something unexpected comes at us from the wilderness.

Even off the island, the stories I hear from others who have lost their jobs and houses are of people who’ve been put out of step and who find that it is nearly impossible to run fast enough to get back to their old place and pace in the pack. They are leading unique lives, redefining finances for people, and in some cases questioning the need for conventional finance, or even conventional currency. Two hundred years from now will anyone look back and write about an anthem written in the midst of such turmoil? Two hundred and thirty seven years from now will anyone note the courage of the people who felt the need for change?

To all who live courageous lives, even if you feel a bit out of step, Belated Happy Third of July. 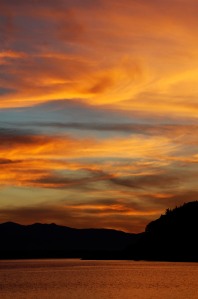 My favorite way to see red in the air.