I’ve been seduced – by technology. So goes the accusation, and I admit there is evidence that it’s true. This week, forced obsolescence and a failing memory meant that I had to get a new cell phone. The good news was that the failing memory wasn’t mine; it was my old cell phone’s SIM card. Even without that failure, my phone had become so old that the cell phone company called to tell me that they were dismantling the hardware that would listen for my calls. I had to get a new phone. I’ve waited this long because I was waiting for a particular phone I’ve heard about and seen, but that hasn’t been released yet. It’s a cell phone that includes a projection TV in basically the same package as a smartphone. I’ve waited for years, not seduced into thinking I needed one, but seduced by the prospect of the disruptive technology and the potential for my investment in the responsible company, MicroVision. Alas, their PicoP phone has yet to reach the market. Alas, MVIS has yet to get me out of debt.

Somewhere among these posts I’ve chronicled my history of anticipation with MicroVision and MVIS. Maybe I’ll remember which post by the time I upload this post. I’ve held MVIS stock since 2000, back when I first learned about this amazing technology that would eliminate the majority of monitors in the world. Put on a pair of glasses or look at your cell phone and the image would be painted directly on your retina, a true retinal display. Because the light didn’t have to fight past ambient sunshine the image was viewable in daylight, except for maybe in the Arabian Desert or on a glaring ice sheet. So, no, while I was seduced by the technology, I wasn’t blinded by science. I used a demo of the device and was impressed without any damage to my eye. No more need for bulky monitors, their toxic chemicals, chassis of plastic, enormous packing boxes, warehouses and shelves to store it all, and ships, trucks, and trains burning oil to transport them. I bought more.

The idea is simple. Resurrect the idea of old television sets. Take three light sources, red, green, and blue, turn them on and off rapidly, and then move the light in a pattern that covers the screen. Except, in MicroVision’s technology the light came from either LEDs or lasers, and the light was moved by oscillating a mirror on a chip. The entire device was about the size of my thumbnail. It was small enough to fit in almost any device, used very little power because the lights were only on when needed, and the laser version was always in focus. Prototypes of cell phones, camera viewfinders, automobile displays, and game controllers proliferated throughout the last several years.

All prototype and nothing for pay makes a company a fun place to play – and a lousy investment. But, Ta da!; rather than wait forever they produced a standalone projector in 2010: the ShowWX. It didn’t paint the image on my retina. They decided to skip that for a while and instead made a normal projector, but one that was only the size of an iPhone.  I put my money where my money was and bought one. My experience unwrapping it is chronicled in my old blog. For a while I used it to watch DVDs and as a side monitor for my laptop. It was handy. It had enough resolution to fully display DVDs, and was always in focus. I could watch a movie on a pleated curtain if I wanted.  A cell phone that would let me show my art portfolio to prospective galleries? Excellent! A camera with a daylight viewable display of what the camera’s chip saw? Marvelous. I’d seen both possibilities since before I bought my ShowWX. I’m patient. I’d replace my equipment with wonderful upgrades paid for by a profitable stock price. 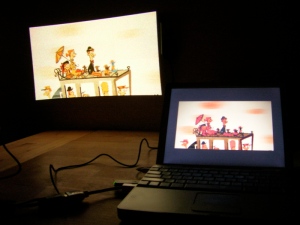 But what I wanted was for the company to get past the prototype phase and into major production – which was going to happen any quarter. The investing community wanted that too. The problem was that the technology wasn’t ready. I’ll skip the technical details except to say that making enough affordable quantities of one component, the green laser, meant the ShowWX wasn’t profitable; which meant the company wouldn’t be profitable until the production issues were resolved. Allow me to restate a bit of that last sentence in the correct tense. The company won’t be profitable until the production issues are resolved. Sadly and unfortunately, the expected profitability of the company has been delayed so long that it has undergone massive dilution and an unsuccessful stock split.

The camera isn’t discussed anymore. The cell phone that was supposed to reach the market a couple of Christmases ago is at least a Christmas away. The standalone unit that was described as an introductory product that would be eclipsed by embedded products has been described as more practical than an all-in-one device. The primary claim to product fame is to be a Head Up Display (HUD) for cars, correctly on sale in Japan for thousands of dollars the last I checked. The stock continues to pop around Apple product announcements because there are many Apple patents that accommodate embedded projectors that have specs that only MicroVision’s technology could meet. Then it retreats when MicroVision isn’t included. My iPad has two cameras. My new cell phone has a camera. Neither has an embedded projector.

Disruptive technologies travel rough roads with many detours. Remember the Apple I? How about Windows 2.0? I actually have one of the earliest tablet PDAs: a Newton MessagePad. Nice idea. Immature tech. A few generations later iPads are marvels and ubiquitous.

Many miraculous lives include hard journeys through tortuous times. There’s a good chance that I’m on such a path. I think that’s true of our society as well. Maybe it is true of MicroVision. A friend and I were using facebook to trade quotes from Shakespeare’s Henry V.
“Once more unto the breach, dear friends, once more . . .”
I’ll skip the exact quote about the English dead. Ick. But the message is that persistent prevails.
“We few, we happy few, we band of brothers;
For he to-day that sheds his blood with me
Shall be my brother; be he ne’er so vile
This day shall gentle his condition:
And gentlemen in England, now a-bed
Shall think themselves accursed they were not here,”
Whether King Henry ever said that or not, that day the English won at the Battle of Agincourt despite being outnumbered as much as three to one by the French. I suspect the play is correct enough in showing that there was so much confusion that the English didn’t know they’d won until the French told them so.
“I know not if the day be ours or no.”

I sit here, cell phone beside me, iPad resting in its dock, MVIS at $2.28 (effectively $0.285 pre-split). Over the last twelve years I’ve invested about three years living expenses in MVIS, and currently my holdings are worth about a month’s living expenses. My total portfolio is worth less than a few months living expenses, though I am stretching that by only making partial payments to my mortgage. But, supposedly within the next few months or a quarter or so the green laser production issues will be fully resolved and very large shipments will potentially make MicroVision a success, which is hopefully quickly reflected in the price of MVIS.  Despite MicroVision’s rough road, the potential persists. Once upon a time, there was an estimate of MVIS for about $128. That was before the split. Call it $125 and do the math to end up with a current price for MVIS of $1000. Skip the emotion. Look at the math. That’s a potential that would appease me and my mortgage company.

Some things sound too good to be true, and so far MicroVision has sounded good. But good things can come true. That’s the holiday spirit.

I’m not solely relying on MVIS to recover and attain those heights. My investment in MVIS is one part of one plan, and I have at least four major plans (investments, entrepreneurship, employment, real estate + collaborations.) Diversification is important, eh? Even if only half succeed half as well as they can my finances will be more than enough.

In the meantime, there is art to market, distribute, and sell. There are a couple of books to finish. There are clients to consult with. There are jobs to apply for. I work because I can’t just wait.

Ah ha! I found the chronology. I’ll repost it here.

2000 Attended Annual Stockholder’s Meeting (ASM)
Monochrome available. Color soon.
“I wonder if there aren’t some shareholders that are losing patience and are therefore anxious, but who also recognize potential and are therefore hanging in there with the company.” my commentary

2002 ASM
Microdisplay should be packaged later this year with production in late 2003.
The goals are to be profitable in mid-2004.

2004 ASM
Some analysts have projected cash flow breakeven for 2H05.

2006 ASM
New CEO.
The PicoP – mini-projector was there.
The first high volume product (hundreds of thousands or more) will be available late 2008 or early 2009.

2007 ASM
The embedded devices will reach commercialization in early 2009, but sample may be available in early 2008.

2008 ASM
A customer survey largely confirmed price point of $300 for the standalone unit.

2009 February – First VIP Club communique
“The current shipping schedule is planned to begin with initial quantities in mid-2009.
As VIP Club Members, you’ll be among the first to get dibs at the commercial product when it becomes available.
For non-VIP Club Members well, those individuals might just have to wait in line.”

2009 ASM
Embedded in 6-9 months after standalone is more like, “probably in time for Christmas 2010.”
Competitors are selling at $300-$600. Microvision will sell at a premium and with better margins outside the US.
The VIP customers (8,000) are competing with large corporations that may be willing to buy the entire inventory. Details to come.
AAPL news? Be patient.
ShowWX officially Launched

3 Responses to Waiting For PicoP