One person, a small group, can make a big difference without spending a lot of money. A person on one side of a road is healing people, building community, and helping artists, including me. Across the street is an old community dance hall sustained and maintained by a small group of volunteers, including dancers, including me. Havens for two parts of my life are neighbors. I bow to such people who do such good work for the good of it, for the fun of it. Why not? They’ve caught on. Doing good can be a joy.

My photos have been in demand this year. Not photos of me, but my photos of Whidbey Island. Without making any cold calls my photos have been on overlapping exhibit in a series of locations since the beginning of the year. They’re booked through the middle of July with September and October already scheduled too. I’m glad to see that people like my work. About a week ago, Dr. Craig Weiner of The Chiropractic Zone, called and asked if I would exhibit my photos in his office. Of course I said yes. That may surprise many professional photographers who would only show in high-end galleries, but I know something they don’t. Labels are misleading and constraining. Stereotypes obscure reality and dismiss opportunity. A chiropractic office can be more than a place to tend an aching back.

Dr. Craig Weiner is well known on Whidbey, and probably beyond. (Check his YouTube channel for his speech at Bastyr University.) He’s well known for his healing work; otherwise, he wouldn’t be in business. He also recognized that his space could do much more than heal individuals. It could also be a garden to sprout communications and support a healthier community. Every month or so he invites key people to give thought provoking talks on issues that typically have the word Transform in the title. Go back out to his YouTube channel and watch a string of excellent interviews and talks (including Drew Kampion from drewslist who I blogged about in A Bow To Drewslist.) Patients use the tables. Speakers use the space. Why not use the walls by inviting artists to display their work? It may sound unconventional, but this is Whidbey, and I got the quick call to install because the previous artist sold so much art that there were too many blank spaces.

I enjoy showing and selling my art online or from galleries, but I won’t ignore such an opportunity. So, on relatively short notice, I installed a dozen or so pieces. The current favorite seems to be October’s Arms, from Twelve Months at Deception Pass. 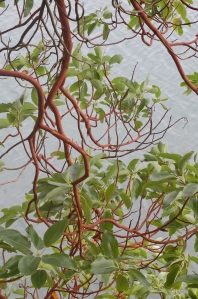 We had a bit of interplay about which goes where. A bit of discussion about details like pricing and custom orders. A couple of hours later and we’ve decorated his healing space with peaceful pictures, and my artistic self feels healthier too.

His effort cost him less than the two hours. It cost him the time for a few friendly discussions, then I set to work. He ends up with frequently changing art, and the opportunity to help an artist. He doesn’t ask for commissions. His talks ask for donations to charities, so they aren’t money making events. Of course, such efforts draw attention to him and his work, but authenticity is hard to hide, and he authentically wants to help. His help will cost a bit though because he decided to host a reception next week (Thursday April 12th from 5PM-7PM). I suspect he’ll spend a bit on snacks like he did for some of the classes I’ve attended (Right Brain Writing), but I suspect it costs far less than most advertising and is much more fun.

Ironically, while I cheer his talks, I rarely attend them. He has them at the same time as the Tuesday Night Dance that happens across the street at Bayview Community Hall.

Almost every Tuesday night for the last four years an informal group of dancers got together to practice and dance. We all realized that we wanted a setting that was less structured than a class and less formal than a dance. We wanted a space and a time where and when we could practice, refine old moves, learn new ones, or simply unwind and have fun. Classes intermingle so beginning swing steps are thrown in with experienced waltzers and intrepid tango stylists. Others may have done the same with formal organizations, dues, and meetings, but the group casually arranged for keys to the hall, music, and the easy logistics of setting up chairs and turning on the lights and heat. Everyone pitches in about $5, and a fundraiser for the hall happens – though considering its insulation that may not cover the heating bill some nights. For less than some people spend on a dinner a community gathers, applauds, supports, and encourages each other. Back when I had more money I gave more than my share because such things are much more valuable than $5 and giving a bit extra was much more effective charity than paying into some administrative bucket. I probably wasn’t the only one.

Alas, operating any such organization can drain a person’s energy; and within any group some will devote more time, effort, and money to the cause. I know because I helped organize dances in that hall with those people for a few years. Amidst the thanks were lots of minutia, negotiations, and complaints.  As I went to last night’s dance I knew that it was probably the last, but probably not for long. Some of the key people needed a break and no one was stepping into the role, but the demand remained. After about a half hour of dancing, and a round of applause for a returning newlywed couple, there was a break. One man stood and announced that he valued Tuesday Night Dance enough that he would take on the task, maybe every other week and especially if he had a bit of help. Various hands raised, including mine – but not too high, but maybe I can help a bit – again.

I was tired last night. New Road Map‘s three day board retreat was over and one of the topics was finding people who could stand up and help others engage in financial integrity, financial intelligence, financial independence, financial literacy, and simple living. As Board Secretary I’d collected the notes and released the minutes. As part-time host I cleaned my house. All of the board members were unpaid volunteers. Some of whom had worked hard enough and long enough and were looking for a break. Thanks to two new members (Gordon Morrow and Steve Scoles) one member (Fred Ecks) was able to become emeritus, and the work is able to continue. Does anyone else want to stand up and help?

People standing up create healing and healthy havens for us all, physically, mentally, emotionally, artistically, communally, and financially. I bow to you all. Let’s give them a hand.