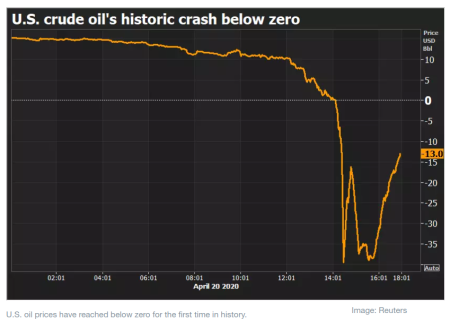 Economists do not like negative numbers, at least not ones that make the economy diverge from some norm. A new one showed up in the last few days (mid-April 2020), negative oil prices. Yep. Want to buy some oil? You probably won’t be able to take advantage of what is probably a very temporary event, but at least for a few hours, producers were producing so much oil that they were paying people to take it away. Surprised? Sure. But the economy has been getting weirder for the last few years. Check your assumptions because they aren’t academic; they’re part of any plan you have behind your personal finances.

Look back to a post from earlier this year, Oh Know 2020. At that time, I’d been watching China’s coronavirus crisis, but not saying much because it was over there. That ‘there’ is now everyone’s ‘here’. At the start of the year it was relatively easy to see hurdles in politics and elections, social unrest, climate crises, natural disasters, financial instabilities, and unknowns. Let’s put the corona crisis under the Unknown category. It was known, but mostly in retrospect. Now, it is affecting almost all of those categories. The response to the virus has definitely been political. Social unrest is apparent as we realize our essential personnel are not treated as valued people, and being poor is costing more than most realize. The natural disasters aren’t as affected, but climate has actually improved simply because we aren’t in nature much, lately. The financial instabilities were bad enough: inequality, increasing debt at all levels, and a general mismatch between needs and budgets. Now, record unemployment, an unavoidable recession, and an uncertain schedule for, well, living in general are going to keep the economy uncertain for months, probably years.

So, how are your assumptions doing so far? Mine? If they were written in chalk, there’d be a lot of dust around as erasers are cleaned after clearing blackboards.

The negative oil prices are weird enough, but they make sense. Fossil fuels are under pressure from competitive renewable energy sources, and from an expanding attitude of switching from consumption to sustainability. As renewable energy gains more users, their demand for fossil fuels falls. Fossil fuel providers, however, have high fixed costs. Fewer customers, same costs, so their prices should go up; but that drives away customers. Profits fall. Profits fall enough that some low-cost producers with cash reserves attempt to drive high-cost competitors out of the market by temporarily producing more oil, increasing supply, driving down prices, and making marginal producers get out of the market. Increased supply, low prices, good news for filling the tank, right? And then governments finally realized how bad the corona crisis was and told billions to Stay Home, maybe Work From Home. Less driving. Less demand for fuel. As long as enough of us used the fuel they produced, they could continue to produce it. But. Our consumption dropped so far that the industry’s tanks weren’t being emptied. Storage tanks on land are almost full. A significant amount of oil is being stored in tankers because there’s no where else to store it. Turning off wells isn’t easy, evidently. Prices fell from $100/barrel a few years ago, to $60/barrel, then $40/barrel, then the price wars drove it down to $20/barrel, then for a few hours less than negative thirty (<-$30/barrel.) Take my oil, please; they said. At the close of business April 21, oil was back up to $9/barrel. Not $9/gallon, but $9/barrel. That may be cheaper than water in some regions. Some aspects of this are discretionary, but such an event can change an industry.

Alone, that is weird enough. But, at the same time much of the world’s finances are experiencing very low and sometimes negative interest rates. Contemplating Negative Interest Rates was a post from August 2019. Money is accumulating in so many havens that countries are trying to encourage people to spend it by discouraging saving. The more money in the havens, the less there is in the economy, the greater the inequalities, and the less stable the entire economy. The US was one of the few countries avoiding negative interest rates, but corona crisis convinced the Fed to drop the rates to zero. Ironically, that convinced some mortgage rates to rise as mortgagors saw it as a sign of greater financial risk. The fact that so many countries were already experiencing negative rates is an indication that the economy wasn’t as healthy as it could be, and now is even worse.

Assumptions are being erased, regardless of whether we recognize it.

Since the Internet Bubble and the Great Recession we’ve become familiar with very low savings interest rates for individuals, and countries have witnessed very low rates of savings from individuals. Many people were only one or two paychecks from insolvency or losing housing. That’s being tested.

Conventional wisdom about investing is being challenged as algorithms out-compete people, at least in the short term. Companies that are accumulating cash aren’t reinvesting in research and development as much as before. Stock buybacks are popular, but do nothing for creating a future for the company, the economy, or society. Then, a virus hits and the markets drop faster and farther than most folks knew was possible.

Common plans work to goals of retirement that can be years or decades away (or decades in the past for some like me), or mortgages that are frequently measured in thirty year blocks. For the next year, interest rates, income, expenses, market returns, and even taxes will be in flux. The details may change every day. The essentials are more reliable.

Crises are painful and opportunities. For those with higher risk tolerances (like me) and sufficient resources (not like me) this can be a time to invest in depressed assets, or in assets that are expected to rise. I’ve been invited to participate in several conversations about what comes next and what can we do about it now. Happy to have the conversation. Wish I could act on what we learn. For those who are near the edge, it is a scary view. Providing goods and services that are immediately needed or wanted may be the start of a new business. (Several clients are hoping to provide help to people trapped in their houses.) For those who can stand back from the edge and gain a different perspective, there are opportunities (maybe in those new businesses); but I know my caution and partly the inspiration for this post is to challenge the assumptions behind those opportunities. Is an intriguing possibility a good idea based on the way the world was, the way the world is, or the way I think the world will be? Something I’m thinking about every day.